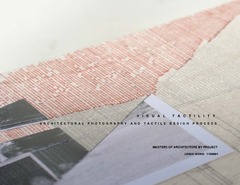 RESEARCH QUESTION: To investigate the designing potential of the photograph in architecture, through tactile design processes. It can be argued there are two familiar ways architecture is portrayed in a photographic image. The first is the incidental relationship of architecture to the subject of the image. The second is the heightened objectification of the built form. The former often correlates with the depiction of a spatial interior, whereas the latter is more often seen in reference to the exterior of a building. Walter Benjamin states: “Buildings are appropriated in a two fold matter: by use and by perception – or rather by touch and sight…On the tactile side there is no counterpart to contemplation on the optical side. Tactile appropriation is accomplished not so much by attention as by habit. As regards architecture, habit determines to a large extent even optical reception. The latter, too, occurs much less through rapt attention than by noticing the object in an incidental fashion. This mode of appropriation, developed with reference to architecture, in certain circumstances acquires canonical value.”1 Benjamin implied that one cannot contemplate art or architecture only visually. This contemplation, which leads to habit forming tactile experiential knowledge, is what allows us to appreciate and gain a heightened experience of architecture. However, this tactile knowledge is difficult to obtain through viewing a photograph, as it is principally a visual object. The proliferation of architectural photography has led to a particular refining of content, often influenced by the designers themselves and the commercial interests for which the photograph is commissioned. Jonathan Hill states: “The reputation of an architect is, in part, dependent on his or her ability to generate a good photograph. If an architect is successful the same image is published throughout the world, to be copied by other architects…”2 In the course of this project, my objective was to analyse the photographic image; its periphery, perspective and substance, to explore the photograph’s architectural designing potential, beyond the passive representation of space. 1 Benjamin, W. (1969) The Work of Art in the Age of Mechanical Reproduction, Illuminations. (H. Zohn, Trans.). New York: Schocken Books. p.240 2 Hill, J. (2001) Weather Architecture (Berlin 1929-30, Barcelona 1986-, Barcelona 1999-), Architecture – the Subject is Matter (J. Hill Ed.). London: Routledge. p.62