Linking organisational culture and values with a firm's performance: a case study from the NZ airline industry 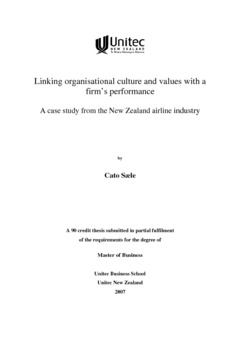 Saele, C. (2007). Linking organisational culture and values with a firm's performance: a case study from the NZ airline industry. Unpublished thesis submitted in partial fulfillment of the degree of Master of Business, Unitec Institute of Technology, New Zealand.

The purpose of this research has been two fold. Firstly to conduct a cultural assessment of a New Zealand airline (referred to as “Pukeko Air Ltd.” for confidentiality reasons) in order to identify the perceived current and future preferred organisational culture and organisational values present in this organisation. Secondly to assess how selected organisational members associated the present and future cultural and values profile with organisational performance. A hybrid research methodology was employed, where data was collected in two stages; one quantitative and the other qualitative. First, a quantitative survey questionnaire was distributed to all employees, effectively combining Cameron and Quinn’s (1999) Organisational Culture Assessment Instrument, and McDonald and Gandz’ (1992, p. 69) “Shared values for the modern business corporation”. Second, the results and outcome of the survey formed the basis for six qualitative interviews with senior management staff. The interview questions sought management’s interpretation of survey findings, and in particular the relationship between the current and future cultures and values and associations with organisational performance. The findings from the research show a relatively close alignment between the current and preferred future organisational culture. This signifies that the organisation is in a good situation for the future. Moreover, the research project sought senior staff members’ perceptions of organisational culture’s role in performance. The findings suggest performance is somewhat affected by culture and values, and that these elements helps determining what sort of airline the organisation wants to become, as well as reducing impact of external factors affecting the company. The study indicates not only what type of culture and which values are deemed conducive to success from a management point of view, but also highlights the perceived importance of commitment and ownership in creating a strong culture in this New Zealand Airline.

Master of Business (Management and Entrepreneurship), Unitec Institute of Technology