Obstetric sonography in Fiji: A review of the current practice at an urban public hospital 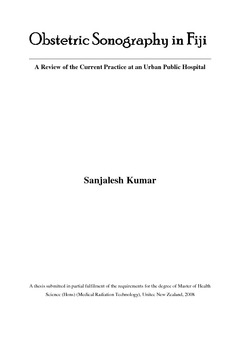 Kumar, S. (2008). Obstetric sonography in Fiji: A review of the current practice at an urban public hospital. Unpublished thesis submitted in partial fulfillment of the degree of Master of Health Science (Medical Radiation Technology), Unitec Institute of Technology, New Zealand.