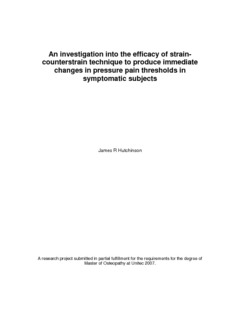 Hutchinson, J. R. (2007). An investigation into the efficacy of strain-counterstrain technique to produce immediate changes in pressure pain thresholds in symptomatic subjects. Unpublished thesis submitted in partial fulfillment of the degree of Master of Osteopathy, Unitec New Zealand, New Zealand.