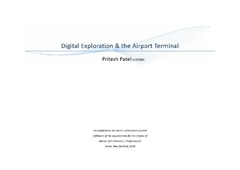 Airport terminals offer the first and last impressions of a country. They are the gateways to the rest of the world, however, the utilitarian terminals of New Zealand fail to portray the excitement of travel and fall short of expressing our individuality as a nation. Airport terminals have historically offered architects the opportunity to push the boundaries of design, and despite the advances in digital architectural technology, New Zealand’s airports have remained lacklustre – in contrast to the contemporary terminals of Europe and Asia. The digital revolution in architecture has remained largely unrealized. Digital exploration of architectural form has led to countless speculative designs which have ultimately been regarded as unnecessarily theatrical, unpractical and most significantly, unbuildable. The reason being, the freedom of being able to design in a virtual world has led to architects designing for the virtual world, instead of the world we actually inhabit, subsequently failing to explore the buildings which exist within it. This project aims to explore [airport terminal] architecture, digitally. By exploring the built precedents of airport terminal architecture, using digital means, with the intent of forming design conclusions and to create an informed framework. To then employ the design conclusions in the architectural design process for an airport terminal in New Zealand; exploring architectural form within the framework manifested by the research and the intent of existence in the real world.