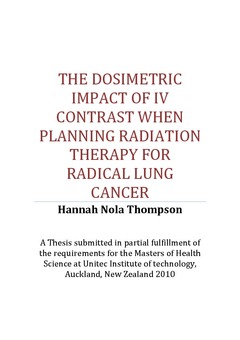 Thompson, H. N. (2010). The dosimetric impact of IV contrast when planning radiation therapy for radical lung cancer. A Thesis submitted in partial fulfillment of the requirements for the Masters of Health Science at Unitec Institute of Technology, New Zealand

The purpose of this study is to investigate the need to account for the presence of Intravenous (IV) contrast on planning computered tomography (CT) scans of the thorax for the radical treatment of lung cancer. This study required the relationship between CT numbers and relative electron densities (RED) to be also investigated. Research in this area has concluded that CT numbers of high atomic number materials, such as contrast, currently can not be accurately converted to RED for use in planning. This study therefore used the current CT-RED conversion file to investigate the impact of contrast on calculations in the thorax. Previous authors who have conducted research on the impact of IV contrast on planning calculations have used many different experimental methods. The validity of many of these previous studies comes into question due to the experimental designs selected. For this reason, this study has been designed to use a research method which is meant to represent the actual clinical situation more accurately. The optimal experimental design for investigating the dosimetric effect of IV contrast in a clinical situation is the pre-test/post-test design. As current protocol at the research location is to take pre- and post-IV contrast scans, both were available for data analysis. Assessment involved comparing dose calculations on contrast-containing CT scans to non-contrast scans. For each patient entered into this study, a plan was completed using both the non-contrast and contrast CT scans, keeping the monitor units (MUs) delivered constant. Dose Volume Histogram (DVH) data from each plan was collected for analysis. Variables recorded included: lung V5, 20 and 30, mean lung dose (MLD), spinal cord maximum dose, heterogeneity index, conformity index. Previous researchers have found that the impact of IV contrast on dose calculations in the head and neck region was insignificant. However, significant differences have been found using phantoms and in some small studies performed on other anatomical sites. Many of these studies did not accurately reproduce real clinical situations as they employed experimental methods that forced relative electron densities to represent contrast enhancement on non-contrast CT scans. This limits the extent to which results from these studies can be applied to clinical situations. This study found no significant differences between the plans produced on the contrast scans and non-contrast scans.