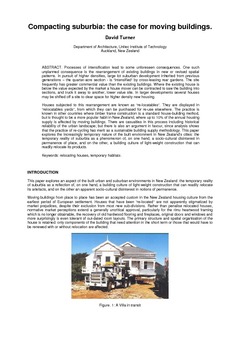 Processes of intensification lead to some unforeseen consequences. One such unplanned consequence is the rearrangement of existing buildings in new or revised spatial patterns. In pursuit of higher densities, large lot suburban development inherited from previous generations – the quarter-acre section - is “intensified” by cross-leasing rear gardens. The site frequently has greater commercial value than the existing buildings. Where the existing house is below the value expected by the market a house mover can be contracted to saw the building into sections, and truck it away to another, lower value site. In larger developments several houses may be shifted off a site to clear space for higher density new housing. Houses subjected to this rearrangement are known as “re-locatables”. They are displayed in “relocatables yards”, from which they can be purchased for re-use elsewhere. The practice is known in other countries where timber frame construction is a standard house-building method, but is thought to be a more popular habit in New Zealand, where up to 10% of the annual housing supply is affected by moving buildings. There are casualties in this process including historical reliability of the urban landscape; but there is also an argument in favour, since analysis shows that the practice of re-cycling has merit as a sustainable building supply methodology. This paper explores the increasingly temporary nature of the built environment in New Zealand’s cities: the temporary reality of suburbia as a phenomenon of, on one hand, a socio-cultural disinterest in permanence of place, and on the other, a building culture of light-weight construction that can readily relocate its products.