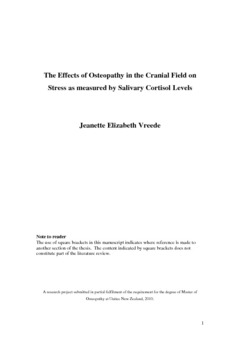 Vreede, J. E. (2010). The effects of osteopathy in the cranial field on stress as measured by salivary cortisol levels. (Unpublished document submitted in partial fulfilment of the requirements for the degree of Master of Osteopathy). Unitec Institute of Technology, Auckland, New Zealand. Retrieved from https://hdl.handle.net/10652/1608