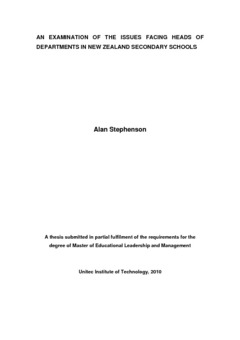 Stephenson, A. (2010). An examination of the issues facing heads of departments in New Zealand secondary schools. (Unpublished document submitted in partial fulfilment of the requirements for the degree of Master of Educational Leadership and Management). Unitec Institute of Technology, Auckland, New Zealand. Retrieved from https://hdl.handle.net/10652/1609

This research examines the issues facing Heads of Departments (HoDs) in New Zealand secondary schools. The role of an HoD has changed considerably over the last one to two decades. This is evident in the complexity of the role and the subsequent tensions that now exist, that stem from the plethora of educational initiatives that have taken place since the inception of Tomorrow’s Schools (Government of New Zealand, 1988). A small scale qualitative study is used to examine the issues facing HoDs in New Zealand secondary schools. Five individual semi structured interviews and one focus group were conducted from five urban secondary schools in New Zealand were used to collect and triangulate the data collected. The findings of this thesis indicate that the role of an HoD has issues resulting from and pertaining to the intensification of demands within the role that have occurred since the inception of Tomorrow’s Schools (Government of New Zealand, 1988). The issues identified by the participants were the lack of leadership training that is provided for them. As a subject based instructional leader they identified being provided with ongoing subject based professional development, however, the participants also unanimously identified the lack of leadership training despite it being an important aspect of their multi natured role. The lack of time available to complete tasks in especially in the area of compliance meant that they had difficulty in completing these tasks to a level that met their own professional standards. The time constraints facing the participating HoD also led to tension within the role as tasks they are required to complete were by their very nature in competition with one another. Conceptualising the findings of this research project into a cohesive framework highlights the difficulties facing HoDs as a manager and leader. With what the research identifies as increasingly important and difficult role that they face as a manager and a leader, it is important that more professional development be provided that is specifically targeted at HoDs and is readily accessible to them.