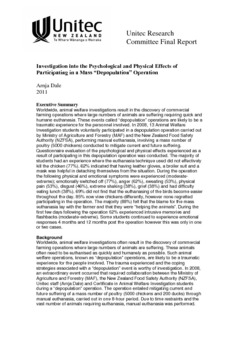 Dale, A. (2011). Investigation into the psychological and physical effects of participating in a mass “depopulation” operation [unpublished Unitec Research Committee Research Report].

Worldwide, animal welfare investigations result in the discovery of commercial farming operations where large numbers of animals are suffering requiring quick and humane euthanasia. These events called “depopulation” operations are likely to be a traumatic experience for the personnel involved. In 2008, 13 Animal Welfare Investigation students voluntarily participated in a depopulation operation carried out by Ministry of Agriculture and Forestry (MAF) and the New Zealand Food Safety Authority (NZFSA), performing manual euthanasia, involving a mass number of poultry (5000 chickens) conducted to mitigate current and future suffering. Questionnaire evaluation of the psychological and physical effects experienced as a result of participating in this depopulation operation was conducted. The majority of students had an experience where the euthanasia technique used did not effectively kill the chicken (77%). 62% indicated that having leather gloves, a broiler suit and a mask was helpful in detaching themselves from the situation. During the operation the following physical and emotional symptoms were experienced (moderate-extreme); emotionally switched off (77%), anger (62%), sweating (53%), physical pain (53%), disgust (46%), extreme shaking (38%), grief (38%) and had difficulty eating lunch (38%). 69% did not find that the euthanasing of the birds become easier throughout the day. 85% now view chickens differently, however none regretted participating in the operation. The majority (88%) felt that the blame for the mass euthanasia lay with the farmer and that they were “helping the animals”. During the first few days following the operation 62% experienced intrusive memories and flashbacks (moderate-extreme). Some students continued to experience emotional responses 4 months and 12 months post the operation however this was only in one or two cases.