The effect of Chinese ESL learners’ beliefs on their autonomous learning 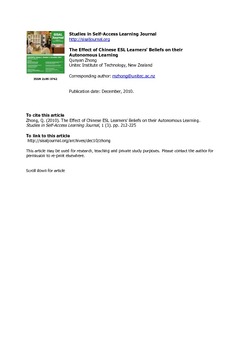 What beliefs do Chinese learners hold about language learning? What is the effect of these beliefs on their autonomous learning? These are the two questions that this study aims to address. I employed naturalistic inquiry (Lincoln & Guba, 1985) to investigate five Chinese ESL learners’ beliefs about language learning and their learning behaviour. A number of instruments (interviews, classroom observations and stimulated recall, learning logs) were used to collect triangulated data over a 12-week period. Following standard procedures of qualitative data analysis, I identified five categories of learners’ beliefs. The results revealed that the beliefs that the learners held were context-specific, reflecting their learning experiences. Some of them were conducive to learning autonomy while others were not. The beliefs influenced the level of the learners’ autonomy. The study suggests that educators should take into account learners’ beliefs when promoting autonomous learning.

This article may be used for research, teaching and private study purposes. Please contact the author for permission to re-print elsewhere.