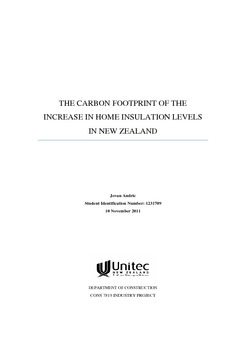 Andric, J. (2011). The carbon footprint of the increase in home insulation levels in New Zealand. (Unpublished document submitted in partial fulfilment of the requirements for the degree of Bachelor of Construction). Unitec Institute of Technology. Retrieved from https://hdl.handle.net/10652/1788

As an energy saving measure, part of an integrated response to mitigate climate change, the New Zealand Government raised the legal minimum requirements for the thermal performance of new homes. A carbon footprint provides a means to quantify the effect this action has had to reduce the impact our new homes have on the environment. To date however, no study has been conducted to ascertain the carbon footprint of this change. This industry research project addresses this issue by determining the carbon footprint of the increase in home insulation levels in New Zealand. An investigation was made to quantify the additional embodied energy required to meet the new standard, and the resulting savings in electrical home space heating energy use. A scientific test and control method was employed. A standard timber framed three bedroom house design complying with the new thermal insulation standard was tested against the same design complying with the old standard over an operational life of 50 years. The test was conducted in New Zealand’s three climate zones with the aid of a computer thermal simulation programme. It was found that double glazed windows make up the bulk of the additional embodied energy and carbon. The benefits of the increase in thermal insulation increased with the colder climate zones which produced the smaller carbon footprint. The heating schedule employed within the home proved to be the most influential factor to both the carbon footprint size and the rate of environmental/carbon payback. It was also found that while current fluctuations in emissions from electricity generation, or even a potential increase in emissions from non-renewable energy sources had little effect on the rate of carbon payback, electricity from all renewable, clean energy sources lengthened carbon payback time six fold. The study showed that carbon payback for the increase in embodied energy could not be reached through heat energy savings within the 50 year operational life of the building if a typical low heating schedule was used powered through electricity generated by all renewable energy sources.