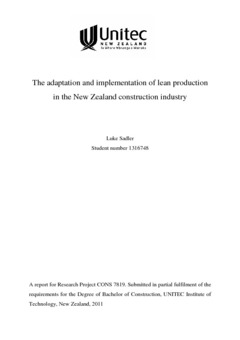 Sadler, L. (2011). The adaptation and implementation of lean production in the New Zealand construction industry. (Unpublished document submitted in partial fulfilment of the requirements for the degree of Bachelor of Construction). Unitec Institute of Technology. Retrieved from https://hdl.handle.net/10652/1790

Japanese manufacturers and in particular Toyota in the 1990s have had large amounts of success in the car manufacturing industry. This success has been directly attributed to a set of management tools and methods put in place to create operational excellence known as lean production. After the success in the manufacturing industry lean production principles have been applied to many other industries and sectors worldwide. This research investigates how lean production has been adapted and applied to the construction industry and more specifically New Zealand’s construction industry. The driving force behind the research is to identify whether or not lean production, which has its origins in a different industry and culture is applicable to New Zealand’s construction industry. Through a review of the existing literature on lean production and ‘lean construction’ as it is known it was established that lean ideas are implemented through many different tools such as the last planner system and just-in-time delivery. To establish how these tools and ideas have been used in New Zealand’s construction case studies were conducted of two main contracting companies who use lean construction was conducted. Finding showed that lean production has been adapted to the point where the lean implementation tools used in construction are almost exclusively specifically designed for the industry. Lean construction is predominantly implemented through the last planner system which promotes the use of almost all of the key lean ideas to various extents. Other lean tools and ideas are implemented at the discretion of individual construction managers. The success of LPS and to a lesser extent JIT indicates that given the same time to develop, potentially tools such as the 5S’s may also share the same success. As there is very little downside to using these tools an obvious suggestion would be that they can be used and perfected to gain an advantage in a very competitive industry.