Factors affecting building services designs of consultants vs. that of design & build subcontractors in Melbourne 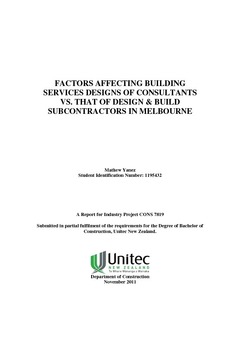 Yanez, M. (2011). Factors affecting building services designs of consultants vs. that of design & build subcontractors in Melbourne. (Unpublished document submitted in partial fulfilment of the requirements for the degree of Bachelor of Construction). Unitec Institute of Technology. Retrieved from https://hdl.handle.net/10652/1793

Building services make up a large portion of a building's capital cost and are also responsible for majority of its operating cost throughout its life. If designed or installed incorrectly can cause damage, nuisance or death disserving building owners, businesses, developers and main contractors. Building services are being designed by consultant designers or design and build subcontractors and there are some fundamental influences and motivations which may affect the way one designs as oppose to the other. The aim of this research was to investigate, identify and compare what factors influence a building services design completed by a design consultancy versus a design and build subcontractor in Melbourne, Australia to report on what’s determining the final characteristics and specifications of the designs for each type of organisation. Through a review of existing literature many aspects that could influence a design have been discovered. There are numerous factors under themes such as procurement, decision making, design aspects and design process. By conducting eight semi structured interviews with four consultant designers and four design and build designers, one from each of the major four building services disciplines electrical, hydraulic, mechanical and fire, and collecting numerical and written qualitative data, this has permitted the comparison of the identified factors between the two organisations to highlight the variances. The variances signified that consultant designer’s designs appear to be influenced in a larger way by factors such as Communication, Alternatives, Maintenance, Ecologically Sustainable Development / Energy Efficiency, Aesthetics, Whole Life Cost, Redundancy / Back-Up, Safety, Coordination and Standardisation; and design and build designer’s designs appear to be influenced in a larger way by factors such as Capital Cost, Prefabrication, Team Building / Team Work, Relationships, Buildability and Innovation & Creativity.