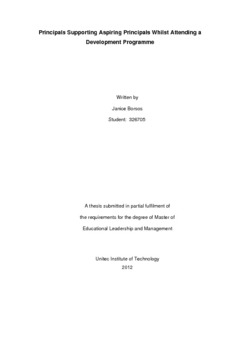 Borsos, J. (2012). Principals supporting aspiring principals whilst attending a development programme. (Unpublished document submitted in partial fulfilment of the requirements for the degree of Master of Educational Leadership and Management). Unitec Institute of Technology, Auckland, New Zealand. Retrieved from https://hdl.handle.net/10652/1831

In New Zealand in 2007 the National Aspiring Principals Pilot (NAPP) was designed to provide professional learning for aspirant principals in an attempt to prepare them for principalship. As part of selection for the programme the applicant needed a recommendation from their principal outlining commitment for support throughout the programme. The establishment of a supportive learning context in the participant’s own school was seen as a vital element of effective development and the aspirant’s principal was important to that support. The purpose of this study was to investigate a retrospective view of the role of the principal’s support for aspiring principals whilst they were attending NAPP development programme and to suggest how such support could be enhanced. In this qualitative study 60 aspirants took part in a self-completion questionnaire. Attached to the questionnaire was a request for a show of interest in a later interview and from the seven who responded, three were randomly selected to take part in an individual semi-structured interview. Their three principals were also interviewed. The findings revealed eight significant issues which impacted on the success of the support received by aspirants, from their principals, while on the NAPP. The issues were: the existing good relationship between the aspirant and the principal; the suitability of the principal for the role; respect for the principal as a role model; understanding of mentoring or training for principal role; principal support for development generally; principal ability to both challenge aspirant and mentor them for difficult conversations; time for mentoring and availability of principal, effective mentoring process overall. The quality of the relationship between the aspirant and the principal emerged as a major catalyst for the success of the mentoring relationship. The relationship and the respect held for the principal as an educational leader, appeared to determine how successful the programme was perceived to be, and whether it resulted in aspirants feeling they had been supported to grow in their leadership roles. Therefore high on the list of recommendations for future programmes is a consideration of screening principals for their suitability to mentor aspirants on a programme such as the NAPP, and that only experienced and successful principals be accepted as mentors.