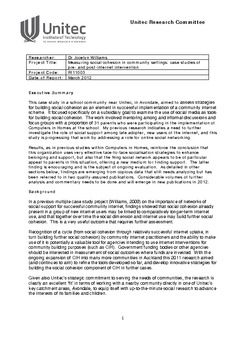 This case study in a school community near Unitec, in Avondale, aimed to assess strategies for building social cohesion as an element in successful implementation of a community internet scheme. It focused specifically on a subsidiary goal to examine the use of social media as tools for building social cohesion. The work involved mentoring among and informal discussions and focus groups with a proportion of 31 parents who were participating in the implementation of Computers in Homes at the school. My previous research indicates a need to further investigate the role of social support among late adopter, new users of the internet, and this study is progressing that work by addressing a role for online social networking. Results, as in previous studies within Computers in Homes, reinforce the conclusion that this organization uses very effective face-to-face socialisation strategies to enhance belonging and support, but also that the Ning social network appears to be of particular appeal to parents in this situation, offering a new medium for finding support. The latter finding is encouraging and is the subject of ongoing evaluation. As detailed in other sections below, findings are emerging from copious data that still needs analyzing but has been referred to in two quality-assured publications. Considerable volumes of further analysis and commentary needs to be done and will emerge in new publications in 2012.