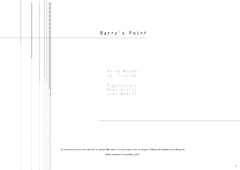 Barry’s Point is the peninsula that founded the development of the Takapuna community. It is a controversial and contentious location that has witnessed many different occupations and events in its short urban history. It has adapted to the persistent changes in society and city. It is now predominantly an industrial road adjacent that runs along the ridge with a motorway feeder at the bottom. This is an area that presents many contradictions. “Concepts may be indifferent, reciprocal or conflictual in relation to context(s).”(1) The opposition of forces that play upon this strip of land form the conceptual understanding of site. An architectural position is developed in relation to both the wider context and the immediate proximities. It is a site of industrial, natural, geographical, infrastructural and architectural complexity. This project is a narration and an interpretation through architecture of the issues of site at Barry’s Point. The architectural proposition explores, articulates and challenges the understanding of context. The result is a formal architectural response. This architecture is pluralistic and involves as many observations as possible in order to form an create an example of responsive yet expressive design that invokes presence. Land is what gives architecture its foundation and this is the first point from which this thesis has considered the architecture. Geography is the relationship of human activity to physical land features; this is the second point from which this thesis has considered the architecture. Movement is how we experience the geography of place; this is the third point from which this thesis considered the architecture. This project attempts to realise an architecture that re-establishes connectivity and spatial relationships with the surrounding context. This architecture is a statement of the collective notion of city, landscape and the architectural promenade. It is a reconfiguration not only of built form, but of ideas of disjunction into an intelligible structure and method of interaction. 1 Bernard Tschumi, Event-Cities 3: Concept vs. Context vs. Content (Cambridge: The MIT Press, 2004), 496.