The Infallible Engine: Indigenous perceptions of Europeans in German New Guinea through the Missionary Press 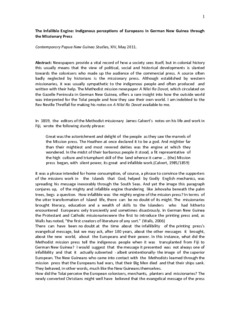 Newspapers provide a vital record of how a society sees itself, but in colonial history this usually means that the view of political, social and historical developments is slanted towards the colonisers who made up the audience of the commercial press. A source often badly neglected by historians is the missionary press. Although established by western missionaries, it was usually sympathetic to the indigenous people and often produced and written with their help. The Methodist mission newspaper A Nilai Ra Dovot, which circulated on the Gazelle Peninsula in German New Guinea, offers a rare insight into how the outside world was interpreted for the Tolai people and how they saw their own world. I am indebted to the Rev Neville Threlfall for making his notes on A Nilai Ra Dovot available to me.