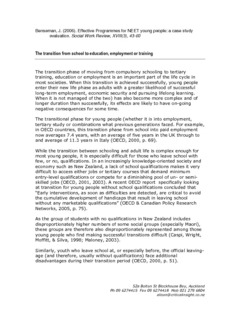 The transition phase of moving from compulsory schooling to tertiary training, education or employment is an important part of the life cycle in most societies. When this transition is achieved successfully, young people enter their new life phase as adults with a greater likelihood of successful long-term employment, economic security and pursuing lifelong learning. When it is not managed of the two) has also become more complex and of longer duration than successfully, its effects are likely to have on-going negative consequences for some time. The transitional phase for young people (whether it is into employment, tertiary study or combinations what previous generations faced. For example, in OECD countries, this transition phase from school into paid employment now averages 7.4 years, with an average of five years in the UK through to and average of 11.3 years in Italy (OECD, 2000, p. 69). While the transition between schooling and adult life is complex enough for most young people, it is especially difficult for those who leave school with few, or no, qualifications. In an increasingly knowledge-oriented society and economy such as New Zealand, a lack of school qualifications makes it very difficult to access either jobs or tertiary courses that demand minimum entry-level qualifications or compete for a diminishing pool of un- or semi-skilled jobs (OECD, 2001, 2003). A recent OECD report specifically looking at transition for young people without school qualifications concluded that “Early interventions, as soon as difficulties are detected, are critical to avoid the cumulative development of handicaps that result in leaving school without any marketable qualifications” (OECD & Canadian Policy Research Networks, 2005, p. 75). As the group of students with no qualifications in New Zealand includes disproportionately higher numbers of some social groups (especially Maori), these groups are therefore also disproportionately represented among those young people who find making successful transitions difficult (Caspi, Wright, Moffitt, & Silva, 1998; Maloney, 2003). Similarly, youth who leave school at, or especially before, the official leaving-age (and therefore, usually without qualifications) face additional disadvantages during their transition period (OECD, 2000, p. 51). [NEETS - Not in Employment, Education or Training).