The survival of patients with heart failure with preserved or reduced left ventricular ejection fraction: an individual patient data meta-analysis 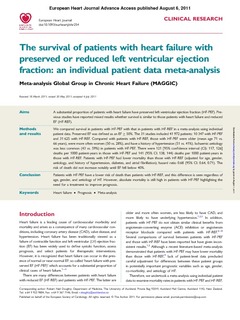 Heart failure is a leading cause of cardiovascular morbidity and mortality and arises as a consequence of many cardiovascular conditions, including coronary artery disease (CAD), valve disease, and hypertension. Heart failure has been traditionally viewed as a failure of contractile function and left ventricular (LV) ejection fraction (EF) has been widely used to define systolic function, assess prognosis, and select patients for therapeutic interventions. However, it is recognized that heart failure can occur in the presence of normal or near-normal EF: so-called ‘heart failure with preserved EF (HF-PEF)’ which accounts for a substantial proportion of clinical cases of heart failure.1 – 4 There are many differences between patients with heart failure with reduced EF (HF-REF) and patients with HF-PEF. The latter are older and more often women, are less likely to have CAD, and more likely to have underlying hypertension.1,2,5 In addition, patients with HF-PEF do not obtain similar clinical benefits from angiotensin-converting enzyme (ACE) inhibition or angiotensin receptor blockade compared with patients with HF-REF.6 – 8 Several comparisons of survival between patients with HF-PEF and those with HF-REF have been reported but have given inconsistent results.1,2 Although a recent literature-based meta-analysis demonstrated that patients with HF-PEF may have lower mortality than those with HF-REF,9 lack of patient-level data precluded careful adjustment for differences between these patient groups in potentially important prognostic variables such as age, gender, co-morbidity, and aetiology of HF. Therefore, we undertook a meta-analysis using individual patient data to examine mortality rates in patients with HF-PEF and HF-REF...

Published on behalf of the European Society of Cardiology. All rights reserved. & The Author 2011