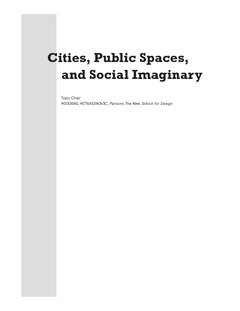 This paper investigates the making of a new public space on the edge of the contemporary city. The first part of the paper starts with a discussion of contemporary thinking about the urban conditions that are found on the margins of many western cities. The paper looks at the writing about this new city, starting with the publication of ‘Edge City’ (Garreau, Joel. 1991) in the early 90s, to recent writing in the ‘The Landscape Urbanism Reader’ (Waldheim, Charles. Ed. 2006). The paper then considers the essay, ‘Making Things Public, Atmospheres of Democracy’ (Latour, Bruno, 2005) and discusses some of the ways in which Latour’s discussion could contribute to the making of new public space. The second part of the paper is a description of a design case study for a new park in Albany City, Auckland, New Zealand, designed by the author. In this case study, the author addresses one of the central concerns in the development of the contemporary city .....