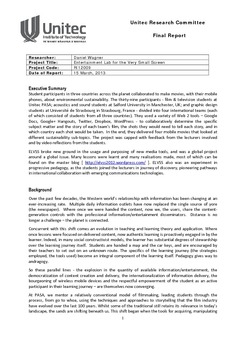 Wagner, D. (2013). Entertainment Lab for the Very Small Screen. other.

Student participants in three countries across the planet collaborated to make movies, with their mobile phones, about environmental sustainability. The thirty‐nine participants ‐ film & television students at Unitec PASA; acoustics and sound students at Salford University in Manchester, UK; and graphic design students at Université de Strasbourg in Strasbourg, France ‐ divided into four international teams (each of which consisted of students from all three countries). They used a variety of Web 2 tools – Google Docs, Google+ Hangouts, Twitter, Dropbox, WordPress ‐ to collaboratively determine the specific subject matter and the story of each team’s film, the shots they would need to tell each story, and in which country each shot would be taken. In the end, they delivered four mobile movies that looked at different sustainability sub‐topics. The project was capped with feedback from the lecturers involved and by video reflections from the students.