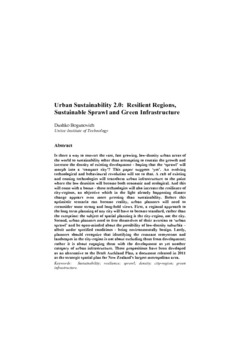 Is there a way to convert the vast, fast growing, low-density urban areas of the world to sustainability other than attempting to contain the growth and increase the density of existing development - hoping that the ‘sprawl’ will morph into a ‘compact city’? This paper suggests ‘yes’. An evolving technological and behavioural revolution will see to that. A raft of existing and coming technologies will transform urban infrastructure to the point where the low densities will become both economic and ecological. And this will come with a bonus - these technologies will also increase the resilience of city-regions, an objective which in the light already happening climate change appears even more pressing than sustainability. Before this optimistic scenario can become reality, urban planners will need to reconsider some strong and long-held views. First, a regional approach to the long term planning of any city will have to become standard, rather than the exception: the subject of spatial planning is the city-region, not the city. Second, urban planners need to free themselves of their aversion to ‘urban sprawl’ and be open-minded about the possibility of low-density suburbia – albeit under specified conditions - being environmentally benign. Lastly, planners should recognize that identifying the remnant ecosystems and landscapes in the city-region is not about excluding them from development; rather it is about engaging them with the development as yet another category of urban infrastructure. These propositions have been developed as an alternative to the Draft Auckland Plan, a document released in 2011 as the strategic spatial plan for New Zealand’s largest metropolitan area.