The Factory and the Chicken House: Construction Experiments in 1950s Auckland 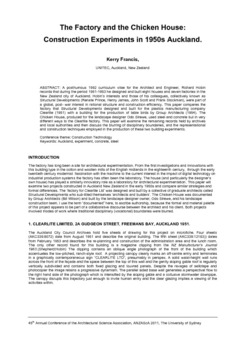 A posthumous 1992 curriculum vitae for the Architect and Engineer, Richard Hobin records that during the period 1951-1953 he designed and built eight houses and seven factories in the New Zealand city of Auckland. Hobin’s interests and those of his colleagues, collectively known as Structural Developments (Renate Prince, Henry James, John Scott and Frank Stockman), were part of a global, post- war interest in rational structure and construction efficiency. This paper compares the factory that Structural Developments designed and built for the plastics manufacturing company Clearlite (1951) with a building for the production of table birds by Group Architects (1954). The Chicken House, produced for the landscape designer Odo Strewe, used steel and concrete but in very different ways to the Clearlite factory. This paper will examine the remaining records held by archives and local authorities and then discuss the blurring of disciplinary boundaries, and the representational and construction techniques employed in the production of these two building experiments.