“Coconut wireless” : examining the impact of the One Laptop Per Child (OLPC) Project on the Niue education community : a case study 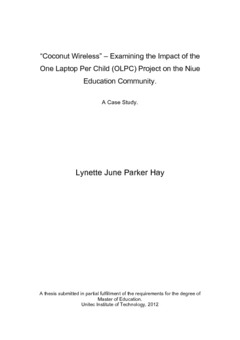 Parker-Hay, L. J. (2012). ‘Coconut wireless’ : examining the impact of the One Laptop Per Child (OLPC) Project on the Niue education community : a case study. (Unpublished document submitted in partial fulfilment of the requirements for the degree of Master of Education). Unitec Institute of Technology, Auckland, New Zealand. Retrieved from https://hdl.handle.net/10652/2216

A small‐scale qualitative research method was chosen and involved the use of semi‐structured interviews and focus group sessions. Semi‐structured interviews were conducted with five teachers from the secondary, primary and early childhood sectors as well as with six parents with children attending either the local primary or high school. Focus group sessions were conducted with three student groups; two groups consisting of students from the secondary school and one large group made up of students who attended the primary school. A documentary analysis was conducted on a range of documents specific to the OLPC project in efforts to form an appreciation of the political and regional context in which the project was situated. The major findings from this research indicate that overall the OLPC laptops had very little impact on teacher practice and that student use of the laptops was more socially oriented rather than the intended educational use outlined by the OLPC project. The findings from this research also highlight a number of interconnected factors that need to be considered when seeking to successfully implement information and communication technology [ICT] into a learning environment by means of foreign aid assistance. Firstly is the importance of developing an awareness of the economic, political and socio‐cultural context in which the learning environment is situated. This must be done through proper consultation with all stakeholders, especially with the teachers. Secondly, the role of the teacher in the successful implementation of ICT needs to be considered from the outset. The impact of the OLPC project on Niue has extended beyond the bounds of the Niue education community for which it was originally intended, providing a number of opportunities and challenges to the Island’s administration. Practical benefits, such as the expansion and the update of the island’s previous wireless network, is an example of one such opportunity. This study has a number of implications for the Niue education community with regard to future consideration of implementing ICT into their learning environments. In particular is the need to focus on the development of technology‐supported pedagogy in order to assist teachers to transform their practice in light of ICT.