Veterinary attitudes towards pre-pubertal gonadectomy of cats: a comparison of samples from New Zealand, Australia and the United Kingdom 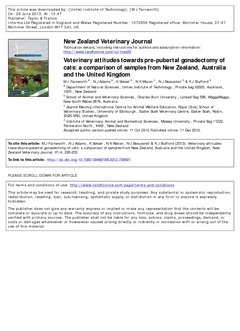 AIM: To compare the attitudes and practices of a sample of veterinarians in New Zealand, Australia and the United Kingdom (UK) towards pre-pubertal gonadectomy of cats. METHODS: Respondents’ demographics were gathered using an electronic questionnaire distributed via professional veterinary associations in the target countries, as were minimum age at gonadectomy and typical age of puberty. Desirability of prepubertal gonadectomy was gauged using three response categories (‘yes’, ‘no’ or ‘sometimes’), respondents were then able to justify the response given. Two-way Analyses of Variance (ANOVA) followed by post hoc Tukey HSD tests were used to test whether there were differences in minimum ages for gonadectomy within and between countries and between providers and non-providers of services to pounds (or animal welfare centres). Views on the desirability of prepubertal gonadectomy relative to demographics were explored using a Likelihood Ratio Test. RESULTS: The survey received 717 responses. Most respondents believed pre-pubertal gonadectomy was either entirely or ‘sometimes’ desirable (556/621), few thought it was undesirable (65/621). Minimum age at gonadectomy was significantly affected by country surveyed and provision or non-provision of services for pounds. Post hoc Tukey HSD analysis indicated the mean age of both spaying and castration (4.3 months) in the UK was significantly different from both Australia (spaying: 3.4 months, castration: 3.2 months) and New Zealand (spaying: 3.4 months, castration: 3.2 months) (all p50.001). Mean ages at spaying and castration were also significantly different (p¼0.008; p¼0.019, respectively) for non-providers (spaying: 3.9 months, castration: 3.8 months) of services to pounds when compared to providers (spaying and castration: both 3.6 months). Likelihood Ratio Tests indicated significant effects amongst countries and between genders relative to the desirability of prepubertal gonadectomy. Respondents from the UK were more likely to answer ‘no’ (p¼0.004) or ‘sometimes’ (p¼0.050) as compared to those from New Zealand or Australia. Females were more likely to respond with ‘sometimes’ as opposed to ‘yes’ than males. Reasons for considering pre-pubertal gonadectomy desirable or sometimes desirable focussed on reducing unwanted pregnancies and improving population control, as well as improving rates of adoption, owner compliance and cat behaviour and health. CONCLUSIONS AND CLINICAL RELEVANCE: In general, pre-pubertal gonadectomy is considered a desirable procedure by those practitioners that responded to the survey. However age at which any such procedure occurs differs depending upon a number of factors. Differences among countries may relate to the specific veterinary association’s guidelines or possibly differences in social discourse which affect perception of cats. There is substantial overlap between the reported minimum age of gonadectomy and the age at which cats can enter early puberty, allowing a window for unintentional pregnancy when pre-pubertal gonadectomy does not occur.