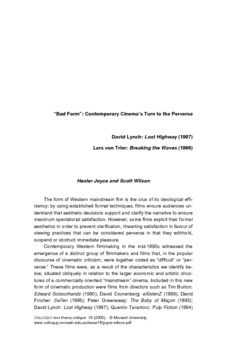 The form of Western mainstream film is the crux of its ideological effi-ciency: by using established formal techniques, films ensure audiences understand that aesthetic decisions support and clarify the narrative to ensure maximum spectatorial satisfaction. However, some films exploit their formal aesthetics in order to prevent clarification, thwarting satisfaction in favour of viewing practices that can be considered perverse in that they withhold, suspend or obstruct immediate pleasure ...