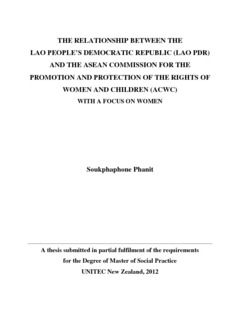 Phanit, S. (2012). The relationship between the Lao People’s Democratic Republic (Lao PDR) and the ASEAN Commission for the Promotion and Protection of the Rights of Women and Children (ACWC) with a focus on women. (Unpublished document submitted in partial fulfilment of the requirements for the degree of Master of Social Practice). Unitec Institute of Technology, Auckland, New Zealand. Retrieved from https://hdl.handle.net/10652/2318

This study sought to explore the relationship between the Lao People’s Democratic Republic (Lao PDR) and the ASEAN Commission for the Promotion and Protection of the Rights of Women and Children (ACWC) as well as investigate how women’s organisations in the Lao PDR can most benefit from the country’s membership of the ACWC and how the Lao PDR can most contribute to the development of the Commission.The field study was mostly conducted in the Lao PDR during the period of December 2011 to March 2012. The qualitative data was generated through conducting semi-structured interviews, participant observations and document analysis. The findings of this study showed that the relationship between the Lao PDR and the ACWC is not so strong:; two years after its establishment, the ACWC is not well known by the core organisations involved in the promotion and protection of the rights of women and children, including some Civil Society Organisations (CSOs) and United Nations (UN) agencies. In addition, the level of knowledge held by experts in the field about the ACWC was varied - from indepth to shallow; some had only heard about it in passing. It was found that the main sources of information about the ACWC are firstly, the ASEAN Department and secondly, consultation workshops which were organised by the Lao Women’s Union (LWU) and certain CSOs, both of which were resourced by the ASEAN Department and ACWC’s representatives. The findings of this study also suggested that the majority of research participants believe that the ACWC will help to facilitate better access to financial support, technical assistance, experience obtained from study tours, and a strong network between the ASEAN member countries. While the potential contributions of the Lao PDR to the ACWC include information sharing, good practice in terms of the implementation of the Convention on the Elimination of all forms of Discrmination against Women (CEDAW), gender integration and mainstreaming, and implementation of specific laws related to the rights of women and children in the Lao PRD.Throughout the study, the researcher maintained both an “insider” and an “outsider” position, as well as a participant observation role.

ASEAN Commission for the Promotion and Protection of the Rights of Women and Children (ACWC), Lao People’s Democratic Republic (Lao PDR), Lao PDR