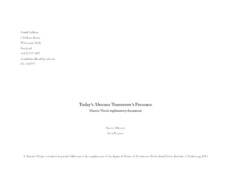 Light has fascinated mankind throughout history, and is the single component that makes all things visible, without it, visual perception is mute. Light is more than that, it also provides warmth, separates day from night, work from rest, sowing and reaping, life and death; it is no wonder then, that light is an integral part of culture and society. Light plays a key role in the visual perception of architectural space, defining size, giving shape, providing colour and highlighting material texture, contributing to the emotional feeling and physical awareness of the space - the atmosphere. However, in contemporary times, there seems to be a growing misconception in society that the perception of light is purely a functional requirement that has little concern with the atmosphere it produces, unless the function is to actually enhance the atmosphere, such as in an art gallery. The project seeks to determine how the qualities of light – its luminance, contrast, colour, direction and distribution affect the visual perception of space. Further to this understanding, the development of the project is to pursue and explore different innovative techniques to manipulate precessional light, the visual awareness of the trajectory of sunlight as it moves across the sky, which results in altering light compositions and effects in order to modify the visual perception of space. And whether the constantly changing nature of precessional light allows a constantly changing perception of space. PROJECT SITE: Ultimate Fighting Championship (UFC) fight club situated on Captain Cook's Wharf, in the Auckland CBD. The design of the architectural proposition, specifically takes five sequential spaces that are key in leading spectators on a journey through the building, and manipulating them to get the best shaped space to receive light. Each of the five spaces will use a different technique in manipulating light that not only best suits the function of the space, but demonstrates the variety of different ideas made from the discoveries of the previous chapters.