Investigate design methods for the Chinese academic library in the future : a design of Nan Hu campus library of Wu Han University of Technology in the future 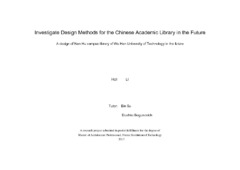 Li, H. (2013). Investigate design methods for the Chinese academic library in the future : a design of Nan Hu campus library of Wu Han University of Technology in the future. Unpublished research project submitted in partial fulfillment for the degree of Master of Architecture Professional.

The purpose of my project is to promote the idea of a regional service platform for information communicating and searching. This will be achieved by designing a kind of academic library which serves for both the local community and the users within NanHu campus of the WHUT. The final design solution is to set up an appropriate model for the Chinese academic library where the traditional academic library still can be traced and the future one will be promoted. In designing a building to fulfill this purpose, there were other issues and related architectural problems which had an influence on the design proposal. These issues are: How to appropriately accord the design of library with the strategic plan of NanHu campus? Which is the way to go for merging the functions of academic library and public library in the future direction of academic library and how to successfully combine these western theories with Chinese characters and local culture in my design? When design architecture, there are usually two kinds of thinking, one is that building itself has strong personality with less consideration of its context and historical and cultural background. The other is that building almost fits to its broad context and is a member of large family buildings. Nevertheless scientific and functional issues in library design must be guaranteed. In front of two ideas, I personally tend to the latter one. Our current site is in a planned new campus which already has been very cultural and environmental. So my design might represent part of the whole university’s history or culture and the proposed design might show the growth and future of academic library. Therefore how to find an appropriate concept which not only fits the large context but also supports its functions to grow was challenging. Different types of library have different spatial and environmental emphases, and it is only too easy for an architect to assume that the experience of designing one type of library can be used, with only small adjustment, in designing another. Fundamentally, a library is not a building but a service organization. It also needs to be borne in mind that, in recent years, there has been a growth in multi-functional libraries, for example, combined university and public libraries, and the combining in Local Authorities of libraries with other council services as “one-stop shops”. This is the approach adopted in the Idea Stores concept.1 In my vision, as well as being the academic library of WHUT, the library also functions as public library serves for residents around campus. As academic and public libraries normally take on different roles, the question of how to architecturally help the combination of these roles needed to be raised. How to keep a balance between the normal use by students and teachers and participation by the public? The design of areas of the library will depend on the philosophy of the service and the needs of the community to be served. Many needs may appear to conflict, for example: Study versus storytime, Privacy versus safety and Procedures versus physical barriers. It is important to think creatively about reconciling apparently conflicting needs, most obviously through use of different zones or timing of events. Alternatives to traditional library issue or enquiry desks should always be considered, for example, “pod” style desks, which avoid a barrier between customer and staff. The problem for the architect is how to bring the library and non-library functions into a coherent whole.2 The future of libraries is a very argumentative issue. It is basically agreed that libraries will continue to contribute to our community, but some of the functions they already have will change. These changes have been keeping developing over the last 10 years as a result of the progress of technology and the digital age. But as library, the traditional functions such as storage of collection, study and so on can't be lost with the advent of digitalization age. How to keep a balance between the traditional mode by paper and the modern one by digital medium is also a challenge.