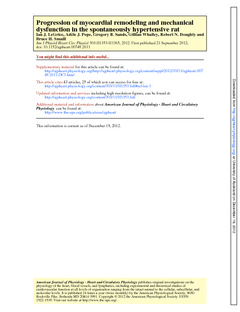 The progression of hypertensive heart disease (HHD) to heart failure (HF) is associated with myocardial remodeling. Corresponding changes in three-dimensional organization of cardiac extracellular matrix have not been quantified or related fully to the development of HF. Spontaneously hypertensive rats (SHRs) and Wistar-Kyoto controls were studied at 3, 12, 18, and 24 mo. Hemodynamic and morphological data, brain natriuretic peptide levels, and echocardiography demonstrate four distinct disease stages: systemic hypertension, diastolic dysfunction, early systolic failure, and decompensated HF. Passive left ventricular (LV) pressure-volume relationships were determined in vitro. Transmural specimens from the anterior LV free wall were imaged using extendedvolume confocal microscopy, and three-dimensional myocardial architecture was quantified. In SHRs, LV compliance was reduced at 12 mo and increased progressively thereafter. However, it was less than in controls for filling pressures 10 mmHg and not significantly different at 10 mmHg. Myocyte cross section was enlarged, with increased variability from 12 mo, while collagen fraction increased progressively. Perimysial collagen fraction remained unchanged with age, although endomysial collagen increased from 12 mo. Perimysial collagen between adjacent muscle layers fused at 12 mo and continued to thicken subsequently, while muscle layers became more dispersed and disordered. We conclude that LV dilatation, which accompanies decompensated HF in this model of HHD, is not due to LV “softening.” While perimysial (and endomysial) collagen networks are substantially remodeled, they are not dissolved, as has been proposed. We argue that progressive disruption of the laminar organization of LV myocardium may contribute to impaired systolic function in HHD.