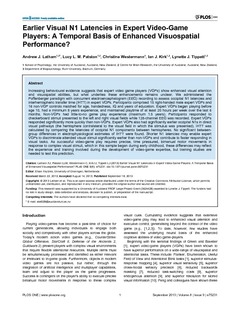 Increasing behavioural evidence suggests that expert video game players (VGPs) show enhanced visual attention and visuospatial abilities, but what underlies these enhancements remains unclear. We administered the Poffenberger paradigm with concurrent electroencephalogram (EEG) recording to assess occipital N1 latencies and interhemispheric transfer time (IHTT) in expert VGPs. Participants comprised 15 right-handed male expert VGPs and 16 non-VGP controls matched for age, handedness, IQ and years of education. Expert VGPs began playing before age 10, had a minimum 8 years experience, and maintained playtime of at least 20 hours per week over the last 6 months. Non-VGPs had little-to-no game play experience (maximum 1.5 years). Participants responded to checkerboard stimuli presented to the left and right visual fields while 128-channel EEG was recorded. Expert VGPs responded significantly more quickly than non-VGPs. Expert VGPs also had significantly earlier occipital N1s in direct visual pathways (the hemisphere contralateral to the visual field in which the stimulus was presented). IHTT was calculated by comparing the latencies of occipital N1 components between hemispheres. No significant between- group differences in electrophysiological estimates of IHTT were found. Shorter N1 latencies may enable expert VGPs to discriminate attended visual stimuli significantly earlier than non-VGPs and contribute to faster responding in visual tasks. As successful video-game play requires precise, time pressured, bimanual motor movements in response to complex visual stimuli, which in this sample began during early childhood, these differences may reflect the experience and training involved during the development of video-game expertise, but training studies are needed to test this prediction.

Copyright: © 2013 Latham et al. This is an open-access article distributed under the terms of the Creative Commons Attribution License, which permits unrestricted use, distribution, and reproduction in any medium, provided the original author and source are credited.