A family and community approach to stealing 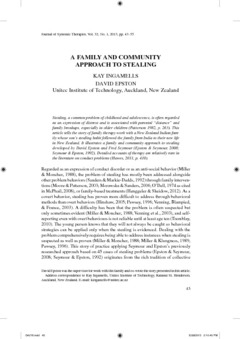 Stealing, a common problem of childhood and adolescence, is often regarded as an expression of distress and is associated with parental “distance” and family breakups, especially in older children (Patterson 1982, p. 263). This article tells the story of family therapy work with a New Zealand Indian family whose son’s stealing habit followed the family from India to their new life in New Zealand. It illustrates a family and community approach to stealing developed by David Epston and Fred Seymour (Epston & Seymour, 2008; Seymour & Epston, 1992). Detailed accounts of therapy are relatively rare in the literature on conduct problems (Hawes, 2011, p. 410).

Copyright of Journal of Systemic Therapies is the property of Guilford Publications Inc. and its content may not be copied or emailed to multiple sites or posted to a listserv without the copyright holder's express written permission. However, users may print, download, or email articles for individual use.