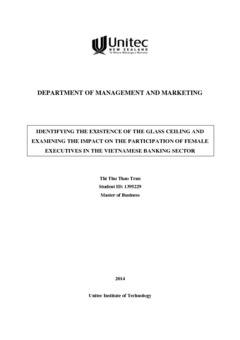 Tran, T.T.T. (2014). Identifying the existence of the glass ceiling and examining the impact on the participation of female executives in the Vietnamese banking sector. An unpublished thesis submitted in partial fulfilment of the requirements for the degree of Master of Business, Unitec Institute of Technology.

Glass ceiling refers to both visible and invisible barriers that stop women from advancing to the top positions. As the glass ceiling exists in most contexts, should it be assumed that the low participation of female executives in the boardrooms in the Vietnamese banking sector is the effect of glass ceiling? Are female executives fully aware of the multiple layers of the glass ceiling in their organizations? Do they choose to confront it, or are they happy with the current situations? Therefore, an empirical research in the context of Vietnam is needed to provide more empirical findings to the literature. In addition, research should be conducted from various perspectives to have a more comprehensive understanding of the degree of the glass ceiling and its effect on leadership effectiveness and organizational performance. The literature review in the research puts the focus on the glass ceiling and its multiple layers, the differences in the leadership styles between male and female managers/leaders and the relationship between gender and leadership effectiveness/organizational performance. Both qualitative and quantitative methods were employed to conduct the research. The self administered questionnaires were responded by sixty eight participants, who came from three of the largest banks in Vietnam. The interviews were carried out subsequently with the participation of ten interviewees in supervisory and middle managerial positions. The results of the data analysis revealed that the glass ceiling effect did exist in the Vietnamese banking sector. The obstacles originated from various sources including social stereotypes, corporate practices, family-work conflict and women themselves. The findings also supported the differences in the leadership styles between male and female managers/leaders and showed greater preference for male executives in the Vietnamese banking sector. However, following the study’s results, there were benefits of removing the glass ceiling to organizational success. Finally, it was recommended that both banks and women themselves should take action in enhancing women’s career development. More research is needed concerning the relationship between glass ceiling and organizational culture or differences between higher and lower level of leaders/managers in leadership/management styles and their effectiveness. These variables are important to provide a more thorough understanding about the glass ceiling issue and its effects.