Meeting at the Edge 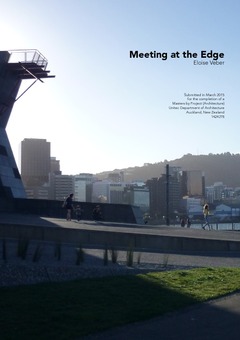 Veber, E. (2015). Meeting at the edge. [Unpublished work] submitted for the completion of a Masters by Project (Architecture) Unitec Department of Architecture, Auckland, New Zealand.

New Zealanders have an undeniable attraction to the coast. As a nation bordering only oceans, natural activity at the edge has captured our attention and imagination since early settlement. Despite different cultural meanings, a love of our unique landscapes and wild oceans unites us. We are outward looking, obsessed by our edges. The meeting of the land and sea is a point of great energy and power that inspires and nourishes. Open spaces at the water’s edge provide an exciting and energising place to meet, relax and refuel. We radiate our cityscapes around a waterfront boulevard, and flock to the edge instead of a town square. So if the coastline is our place to gather, what role can architecture play in facilitating these gatherings? Public architecture in New Zealand seldom reflects this relationship we have with the foreshore. We are afraid to dominate the openness and interrupt the already powerful phenomena at play on the coast. We place humble structures at the edge; public toilets, baches, lighthouses, and lookouts. Disused jetties become repurposed viewing platforms from which we can guiltlessly explore the spatiality of the transition from land to sea. This project looks at two coastal museums as case studies: Te Papa Tongarewa - The Museum of New Zealand and the Museum of Anthropology in BC, Canada. These two museums are both situated on the water’s edge, in a place of transition from urban to natural, in situations where the local inhabitants have strong cultural connections to the land and sea. The studies look at the way the architecture of the museums reflects these aspects of the site in their contextual relationship, their form and the journey created for the user. The Museum of Anthropology, which takes its form and layout from traditional Coast Salish architecture leads us down a series of ramps to an exploding main space where visitors and large carvings mingle. Arranged around a clear axis, the climax is a space that looks outward to the natural setting and faces the ocean, mirrored in pond directly outside the space, emphasizing our relationship to the landscape and the ocean. Te Papa on the other hand does little to capture our deep connection to the landscape and the sea. This project proposes a new national museum in Northland, on the site of the Copthorne Hotel at Waitangi in the Bay of Islands. The museum provides a place where Māori, non-Māori and tourists can gather, reflect on the past and imagine the future, and celebrate a profound love of the place where land and sea interact.