The Polycentric City: What does it mean for Christchurch? 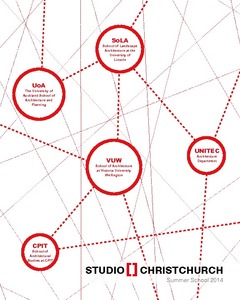 The Polycentric City- What does it mean for Christchurch .pdf (816.3Kb)

Almost three years after the Second Earthquake, it is becoming clearer that the CBD has a long way to go to full recovery. It may take 20 rather than 10 years before a new Central City Christchurch emerges from the present wasteland. That poses the question whether there are alternative, or additional, strategies beyond the Blueprint. Larger Christchurch has more centres of activity than the CBD. And indeed, some of them are manifesting themselves quite robustly already. They are also proliferating in numbers, to the point that Christchurch increasingly looks like a textbook example of ‘doughnut city’ – an urban area with functional suburbs, but an almost empty core. This year’s Summer School opted to investigate the ‘polycentricity’ of Christchurch – whether as real, potential, or desirable - in an attempt, not to undermine the hard work of rebuilding the Centre, but to make propositions complementary to the Blueprint. The three studios interrogated the concept itself; what it means in an era of rampant urban sprawl and the quest for sustainability; and whether Christchurch’s given physical conditions offer specific opportunities not present in other cities. Polycentricity is not only possible in Christchurch: it already exists – as you would expect in a city of this size, with such flat topography and such low density. Before the earthquakes, it manifested itself mostly in the form of one dominant CBD and many suburban sub-centres. These sub-centers were originally modest local shopping centres with community facilities, but over the past 20 or 30 years some of them morphed into shopping malls, which now anchor the major suburban centres. After the earthquake, the city all but lost the main centre – the CBD – while the existing malls prospered. Compounded by the housing shortage, and the Council’s allocation of new green field sites for residential developments on the fringe of the city, new suburban centres are appearing further out from the centre. Polycentricity is also desirable in Christchurch. The city is growing horizontally more than ever and the CBD is proving to be less accessible for a growing number of people. What this studio has shown is that polycentric development is not only possible but likely very desirable at the inner city scale.