Can I say something? The effects of digital game play on willingness to communicate. 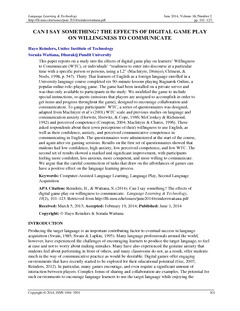 Can I say something - The effects of digital game play on willingness to communicate.pdf (720.3Kb)

This paper reports on a study into the effects of digital game play on learners’ Willingness to Communicate (WTC), or individuals’ “readiness to enter into discourse at a particular time with a specific person or persons, using a L2” (MacIntyre, Dörnyei, Clément, & Noels, 1998, p. 547). Thirty Thai learners of English as a foreign language enrolled in a University language course completed six 90–minute lessons playing Ragnarok Online, a popular online role–playing game. The game had been installed on a private server and was thus only available to participants in the study. We modified the game to include special instructions, or quests (missions that players are assigned to accomplish in order to get items and progress throughout the game), designed to encourage collaboration and communication. To gauge participants’ WTC, a series of questionnaires was designed, adapted from MacIntyre et al’s (2001) WTC scale and previous studies on language and communication anxiety (Horwitz, Horwitz, & Cope, 1986; McCroskey & Richmond, 1982) and perceived competence (Compton, 2004; MacIntyre & Charos, 1996). These asked respondents about their (own perceptions of their) willingness to use English, as well as their confidence, anxiety, and perceived communicative competence in communicating in English. The questionnaires were administered at the start of the course, and again after six gaming sessions. Results on the first set of questionnaires showed that students had low confidence, high anxiety, low perceived competence, and low WTC. The second set of results showed a marked and significant improvement, with participants feeling more confident, less anxious, more competent, and more willing to communicate. We argue that the careful construction of tasks that draw on the affordances of games can have a positive effect on the language learning process.