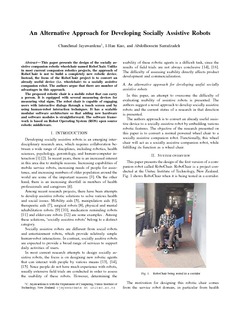 This paper presents the design of the socially assistive companion robotic wheelchair named RoboChair. Unlike in most current companion robotics projects, the approach of RoboChair is not to build a completely new robotic device. Instead, the focus of the RoboChair project is to convert an already useful device (i.e. wheelchair) to a socially assistive companion robot. The authors argue that there are number of advantages in this approach. The proposed robotic chair is a mobile robot that can carry a person. It is equipped with several measuring devices for measuring vital signs. The robot chair is capable of engaging users with interactive dialogs through a touch screen and by using human-robot interaction techniques. It has a scalable modular software architecture so that adding new hardware and software modules is straightforward. The software frame- work is based on Robot Operating System (ROS) open source robotic middleware.