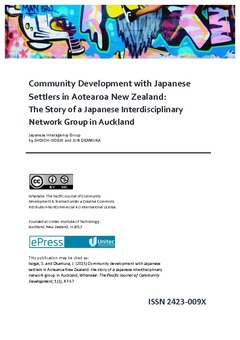 Over the past five years increased attention from Not-for-Profit-Organisations (NPOs) that support new Japanese settlers in Auckland suggests concern about resettlement needs, health inequality and social exclusion among these settlers. This community is growing due to an increase in the numbers of Japanese economic refugees after two significant disasters that occurred in Japan in 2011. Nevertheless, there are limited culturally-relevant resources and Japanese-oriented groups available for the community of Japanese settlers in Auckland. This paper presents a story of a strengths-based, interdisciplinary and Japanese-oriented project called the Japanese Interdisciplinary Network Group in Auckland (JINGA). It explains the development and a range of JINGA activities to facilitate the production of culturally-relevant resources amongst Japanese settlers, promote collaborative partnership amongst agencies, and inspire shared visions of full participation and supportive community networks amongst Japanese community leaders and professionals. Attention is given to the usefulness and limitations of the locality-development model to work effectively with an ethnic minority community, which takes the form of monthly professional meetings and collaborative seminars with other agencies and Japanese practitioners. The implications of this project on community development practice are also discussed. Ongoing engagement with Japanese community members and mainstream service providers promotes various services and supports them to engage with relevant services and/or groups, which is essential to create a supportive Japanese community that promotes a socially cohesive society in Aotearoa (indigenous people of Aotearoa New Zealand) New Zealand.

Whanake: The Pacific Journal of Community Development is licensed under a Creative Commons Attribution-NonCommercial 4.0 International License.