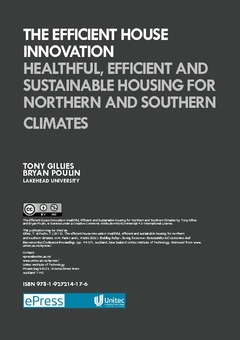 This paper tracks the Efficient House Innovation (EHI) from 2000 to 2015. The main idea of ‘Dynamic Air’ behind EHI is associated with John Timusk (1987) who recognised existing housing solutions were not sufficiently healthful, efficient or robust. His solution was to bring relatively cool, dry air dynamically through the walls instead of the usual air-tight, static construction. However some problems remained. Starting in 2000, the authors of this paper extended and added features to Timusk’s solution to arrive at the EHI. Initial tests of EHI prototypes indicate the reliable fresh air, robustness of structure and energy efficiency that Timusk envisioned. This paper focuses on EHI prototype testing from 2008 to 2015, with implications for housing in cold, temperate and sub-tropical climates.

The efficient house innovation : healthful, efficient and sustainable housing for northern and southern climates is licensed under a Creative Commons Attribution-NonCommercial 4.0 International License.