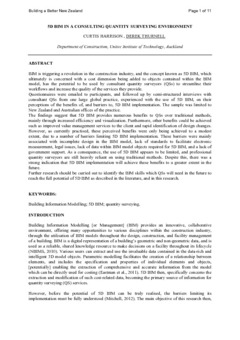 BIM is triggering a revolution in the construction industry, and the concept known as 5D BIM, which ultimately is concerned with a cost dimension being added to objects contained within the BIM model, has the potential to be used by consultant quantity surveyors (QSs) to streamline their workflows and increase the quality of the services they provide. Questionnaires were emailed to participants, and followed up by semi-structured interviews with consultant QSs from one large global practice, experienced with the use of 5D BIM, on their perceptions of the benefits of, and barriers to, 5D BIM implementation. The sample was limited to New Zealand and Australian offices of the practice. The findings suggest that 5D BIM provides numerous benefits to QSs over traditional methods, mainly through increased efficiency and visualization. Furthermore, other benefits could be achieved such as improved value management services to the client and rapid identification of design changes. However, as currently practised, these perceived benefits were only being achieved to a modest extent, due to a number of barriers limiting 5D BIM implementation. These barriers were mainly associated with incomplete design in the BIM model, lack of standards to facilitate electronic measurement, legal issues, lack of data within BIM model objects required for 5D BIM, and a lack of government support. As a consequence, the use of 5D BIM appears to be limited, and professional quantity surveyors are still heavily reliant on using traditional methods. Despite this, there was a strong indication that 5D BIM implementation will achieve these benefits to a greater extent in the future. Further research should be carried out to identify the BIM skills which QSs will need in the future to reach the full potential of 5D BIM as described in the literature, and in this research.