Why does it have to be so flashy? : student perspectives on academic tasks 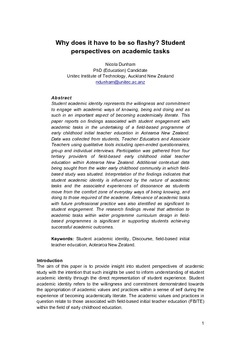 Why does it have to be so flashy_ Student perspectives on academic tasks.pdf (362.4Kb)

Student academic identity represents the willingness and commitment to engage with academic ways of knowing, being and doing and as such in an important aspect of becoming academically literate. This paper reports on findings associated with student engagement with academic tasks in the undertaking of a field-based programme of early childhood initial teacher education in Aotearoa New Zealand. Data was collected from students, Teacher Educators and Associate Teachers using qualitative tools including open-ended questionnaires, group and individual interviews. Participation was gathered from four tertiary providers of field-based early childhood initial teacher education within Aotearoa New Zealand. Additional contextual data being sought from the wider early childhood community in which field- based study was situated. Interpretation of the findings indicates that student academic identity is influenced by the nature of academic tasks and the associated experiences of dissonance as students move from the comfort zone of everyday ways of being knowing, and doing to those required of the academe. Relevance of academic tasks with future professional practice was also identified as significant to student engagement. The research findings reveal that attention to academic tasks within wider programme curriculum design in field- based programmes is significant in supporting students achieving successful academic outcomes.