Shame and authority : tracing the origins of internal control practices in China 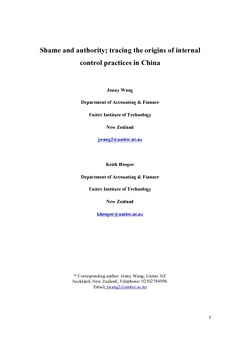 Internal control weaknesses have been a lively topic of discussion since the passing of the Sarbanes-Oxley Act (2002). The discussion has resulted in employing macro methods to identify weaknesses among listed companies. More recently an investigation into the accounts of Toshiba has revealed extensive fraud facilitated by a culture of obedience. Like Japan, China has a long tradition of obedience to authority supported by Confucian ideals. The paper sets out to show how the long-lasting disciplinary structure of Imperial China has left its legacy on the internal control systems of East Asia with respect to its business organizations. By mirroring Foucault’s illustration of punishment and control in medieval French, the paper shows how a similar structure operated in China until 1911. Except there were differences: in the Confucian tradition superiors could not be questioned even when wrong, guilt was always presumed and, with punishment, confession was expected. Performed in public the effect was to shame the individual and reinforce authority. Internal control systems in East Asian organizations echo these mechanisms. The paper considers these mechanisms with regard to how they can create internal control weaknesses. The method adopted is a micro analysis of hotel organizations in line with what Foucault (1980) refers to as subjugated knowledges - local memories regarded as unqualified or actively disqualified with the hierarchies of scientificity. The paper shows how East Asia’s Confucian traditions may impact on the application of internal control in business organizations. The recent Toshiba case is advanced by way of an example.