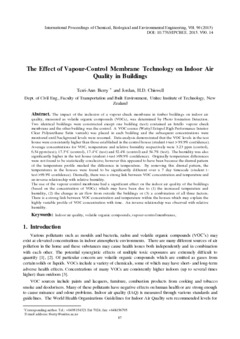 The impact of the inclusion of a vapour check membrane in timber buildings on indoor air quality, measured as volatile organic compounds (VOCs), was determined by Photo Ionization Detection. Two identical buildings were constructed except one building (test) contained an Intello vapour check membrane and the other building was the control. A VOC source (Wattyl Estapol High Performance Interior Clear Polyurethane Satin varnish) was placed in each building and the subsequent concentrations were monitored until background levels were resumed. Data analysis demonstrated that the VOC levels in the test house were consistently higher than those established in the control house (student t-test > 99.9% confidence). Average concentrations for VOC, temperature and relative humidity respectively were 3.23 ppm (control), 6.54 ppm (test); 17.3°C (control), 17.4°C (test) and 52.4% (control) and 54.7% (test). The humidity was also significantly higher in the test house (student t-test >99.9% confidence). Originally temperature differences were not found to be statistically conclusive; however this appeared to have been because the diurnal pattern of the temperature profile masked the difference in temperature. By removing this diurnal pattern, the temperatures in the houses were found to be significantly different over a 7 day timescale (student t-test >99.9% confidence). Diurnally, there was a strong link between VOC concentration and temperature and an inverse relationship with relative humidity. The use of the vapour control membrane had a significant effect on the indoor air quality of the buildings (based on the concentration of VOCs) which may have been due to: (1) the increased temperature and humidity, (2) the change in air flow from outside the buildings or (3) a combination of all three factors. There is a strong link between VOC concentration and temperature within the houses which may explain the highly variable profile of VOC concentration with time. An inverse relationship was observed with relative humidity.