Perceptions and impacts : an observational pilot study of the effects of Argentine ants on honey bees in New Zealand 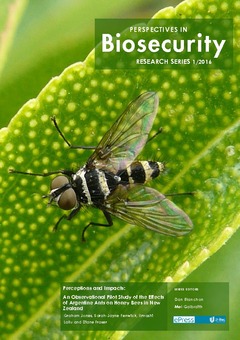 The Argentine ant (Linepithema humile) is an invasive species first identified in New Zealand in 1990. It is an aggressive tramp species that can form very large ‘super colonies’ extending over vast areas and has been reported to rob honey and predate honey bees in hives. This pilot study sought to establish, from a circulated survey of beekeepers, which ant species were present in their hives and what awareness the beekeepers had of the potential impact of Argentine ants. In addition, a simple method of quantifying the effects of the Argentine ant on brood abundance was trialled in the field. Results indicate that several species of ant are commonly found in hives and that surveyed beekeepers generally regard ants as passive occupiers. A percentage cover estimate of brood cover in frames may be a simple way of measuring ant impact when comparing hives uninfected by ants. Photographic evidence is presented as further indication that L. humile foraged within the hive and actively fed on both honey and emerging brood.