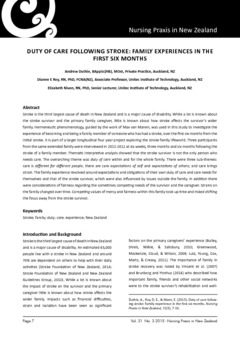 Stroke is the third largest cause of death in New Zealand and is a major cause of disability. While a lot is known about the stroke survivor and the primary family caregiver, littie is known about how stroke affects the survivor’s wider family. Hermeneutic phenomenology, guided by the work of Max van Manen, was used in this study to investigate the experience of becoming and being a family member of someone who has had a stroke, over the first six months from the initial stroke. It is part of a larger longitudinal four year project exploring the stroke family lifeworld. Three participants from the same extended family were interviewed in 2011-2012 at six weeks, three months and six months following the stroke of a family member. Thematic interpretive analysis showed that the stroke survivor is not the only person who needs care. The overarching theme was duty of care within and for the whole family. There were three sub-themes: care is different for different people, there are care expectations of self and expectations of others; and care brings strain. The family experience revolved around expectations and obligations of their own duty of care and care needs for themselves and that of the stroke survivor, which were also influenced by issues outside the family. In addition there were considerations of fairness regarding the sometimes competing needs of the survivor and the caregiver. Strains on the family changed over time. Competing values of mercy and fairness within this family took up time and risked shiftng the focus away from the stroke survivor.