To what extent does working from a standing desk affect cognitive attentional performance? 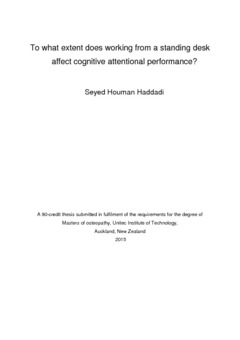 Haddadi, S. H. (2016). To what extent does working from a standing desk affect cognitive attentional performance? An unpublished 90-credit thesis submitted in fulfilment of the requirements for the degree of Masters of Osteopathy, Unitec Institute of Technology, New Zealand.

Occupational prolonged sitting associated with modern sedentary behaviours has been shown to be correlated with obesity and all-cause mortality. The negative impacts of prolonged sitting are not limited to physiological issues and may extend to cognitive function including attentional processes. Attention is an important cognitive domain that is involved in the majority of cognitive performance. The use of standing desks in the workplace offers a potential solution to prolonged sitting; however, the effects of standing workstations on the attention domain of cognitive function have not been thoroughly evaluated in the current literature. The aim of this paper was to identify the effects of working from a standing desk on attention during a simulated working day compared to a seated desk by using a counterbalanced cross-over study design. Thirty healthy volunteers (14 females and 16 males) aged between 20 and 49 years old were randomised into two groups (sitting or standing on the first testing day) that were matched by strata of age and gender. Each participant performed two full days of testing, one in sitting condition and another in a standing condition with a seven-day washout period. Each testing day consisted of three testing sessions and included morning, midday and afternoon times. The effects of each Condition (sitting and standing) and Time of Day (morning, midday and afternoon) on attention were evaluated. The cognitive tasks that measured attention domain included Continuous Performance Task (A-X and Inhibition), Paced Auditory Serial Addition Test and Figural Intersection Task. The results of this study showed a significant increase in performance in the Figural Intersection Task, whereby performance whilst standing was better. A significant interaction between Condition and Time of Day in the Continuous Performance Task – Inhibition showed faster reaction times in the afternoon whilst standing. There were no main effects of Condition for any of the other attentional tasks. With regard to Time of the Day, the findings revealed that, overall, participants performed more efficiently at Midday and Afternoon in comparison to Morning. The findings of this study reject popular concerns of standing workstations affecting attention by showing that the use of standing desks, not only can help reduce sedentary-ness, but can also improve attentional capacity. The physiological and attentional advantages associated with standing desks should be made aware to all corporate parties, companies and offices.

111705 Environmental and Occupational Health and Safety