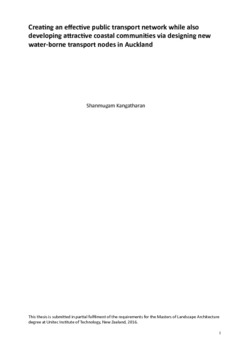 Transport infrastructure networks play a vital role in urban growth. Due to this reason, from the 1840s onwards, the transport network and roads have determined the urban growth of Auckland (Auckland Council, 2012). Auckland is the biggest and fastest growing city in New Zealand. The major controversies of Auckland however, are its poor transport networks and traffic congestion. This is why Auckland is currently placed as 10th most liveable city in the world by The Economist Intelligence Unit. Auckland only scored 92.9 points for infrastructure while it scored 100 points for education, 95.7 points for healthcare, 97 points for culture and environment (Ryan, 2014). Auckland is also surrounded by water, and according to Toy (1977) water is a great asset for urban development. Auckland Transport (2013) indicates that it is necessary to rethink the future of Auckland’s ferry services, in particular the fare structure and ownership of ferry services. It is undeniable that current water transport facilities of Auckland are insufficient. At the same time other public transport networks including bus and train also have poor linkages in peri-urban areas. Transport infrastructure can be studied as a network consisting of nodes and edges. Different types of transport can be represented as different networks with specific properties. Thus, the aim of this project is to enhance the development of the Auckland transport network through further development of water transport with Browns Bay as case study. This means, adding a new node by designing ferry terminal to connect existing transport nodes via new edges. This includes finding suitable ferry terminal location in Browns Bay through appropriate analysis, and designing an attractive zoning design for the selected area. The project will take into consideration the stakeholders’ current and proposed plans and policies. It will also look at contemporary ideas, concepts and theories that are concerned with the relationships between urban growth and transport infrastructure, and the study of infrastructure is based on network viewpoints .