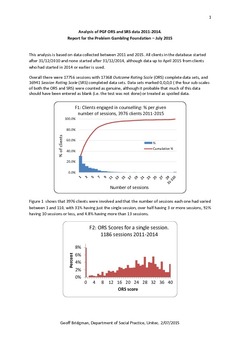 This analysis is based on data collected between 2011 and 2015. All clients in the database started after 31/12/2010 and none started after 31/12/2014, although data up to April 2015 from clients who had started in 2014 or earlier is used. Overall there were 17756 sessions with 17368 Outcome Rating Scale (ORS) complete data sets, and 16941 Session Rating Scale (SRS) completed data sets. Data sets marked 0,0,0,0 ( the four sub-scales of both the ORS and SRS) were counted as genuine, although it probable that much of this data should have been entered as blank (i.e. the test was not done) or treated as spoiled data.