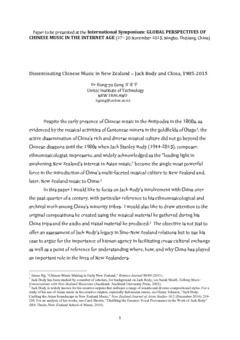 Despite the early presence of Chinese music in the Antipodes in the 1860s, as evidenced by the musical activities of Cantonese miners in the goldfields of Otago, the active dissemination of China’s rich and diverse musical culture did not go beyond the Chinese diaspora until the 1980s when Jack Stanley Body (1944-2015), composer, ethnomusicologist, impresario, and widely acknowledged as the “leading light in awakening New Zealand’s interest in Asian music,” became the single most powerful force in the introduction of China’s multi-faceted musical culture to New Zealand and, later, New Zealand music to China.